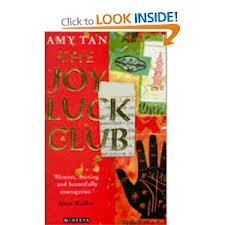 Mine was a different cover  that am unable to find online.

The Joy Luck Club is written by Amy Tan. She is one author whom I wish to read more from now on. I loved the way she has intricately woven the stories around 4 Chinese immigrants in San Francisco who form a mahjong club called the Joy Luck Club. They wish to leave their dark past behind and spend good times with each other while playing mahjong.

Having been in Singapore for a while now, I am intrigued by the Chinese culture. Some aspects fascinate me and no doubt, it is a very vibrant and rich culture. They have a big system of beliefs and understanding some rituals is enlightening to say the least. If you are curious about knowing people from different parts of the world, how they settle in and try to blend with the locals when they move, the conflicts that arise between them and their kids (who are born in a foriegn place), how they try to hold onto their beliefs and fervently wish their children would feel as proud of their culture as well – then, read this book. For everything else, read this book again. It touched me in a very different way and I cannot put that in words.

The story is about 4 mothers, all of them Chinese immigrants in USA. The first section is called “Feathers from a thousand li away“. This section introduces the story and the Joy Luck Club through Jing-Mei Woo who talks of her mother who was forced to flee from Kweilin during world war, leaving her twin daughters behind. She marries another man in USA with whom she has Jing-Mei Woo, the one who introduces the story. Jing Mei-Woo’s mother is no more and Jing-Mei Woo finds herself face-to-face with her mother’s long secret wish – re-uniting with her twin daughters back in China. This section of the book also talks of the other 3 mothers of the club and a story each from their past.

The second section is ” The twenty six malignant gates” talks of the relationship and incidents between the 4 mothers and their daughters during childhood. The emotions come across so beautifully in such subtlety and it is hard to not get carried away.

The third section is “The American translation”  that deals with the daughters as young adults all having problems, conflicts and confusions of their own.

The fourth section is “Queen Mother of the Western Skies” where the mothers talk of how they had faced equally confusing and challenging situations in their time and how they solved them or overcame them. There are instances where you feel like the characters are talking to you because it is so beautifully portrayed. The mother-daughter relationships bring tears to your eyes and you just wish you could meet them all. The final chapter is about whether Jing-Mei Woo finally meets her twins or not.

It is a beautiful poignant tale that lingers long after you have closed the book. While I had to sometimes turn back to get my character names right, I enjoyed doing it actually.

Just one thing. Maybe it is not a great idea to pick this one up when your mother is thousands of miles away.