You can read Part 1 here.

So, the next day saw us waking up at 9:00 A.M. because come what may, no matter how tired I am, I hate missing the buffet breakfasts by the poolside. I love having breakfast slowly savouring everything, watching the sea, watching others sip tea, feel invigorated and submerge my plate with watermelons and bread puddings. I like to pass by that guy who makes omelette and serves them with a smile or look at kids who are overjoyed to see cornflakes, chocoflakes, honey stars and what not !

Oh and I also make sure to try every fruit juice there. Alright, let me stop here for now.

We had breakfast and went back to sleep. You’d think we were the adventure seekers or something but no all of us except my better half went off to sleep. I slept for like 2 hours straight. And then O and L wanted to sleep more (until 4). So, my better half and myself (K and K) went down to the pool for some fun.

We love playing in pool. Neither of us knows swimming because I fail to acknowledge K (my better half)’s ability to flap arms and legs in water and stay afloat for like 8 seconds as self-taught swimming. So, we totally go bonkers and oblivious of the fact that there are 3 and 4 year olds who are actually “swimming”. It is so so fun , really !

And then, as if to re-emphasize the fact that we cannot swim, the kids try different strokes in front of you and we both can only gape at them in awe. I must learn swimming I often remark, only to forget it as soon as I am out of the pool.

We spent a good hour and half in the pool and had a shower and then went for a bite. I always forget to photograph what we eat. I must do it next time. Well, we had some Chinese – Longhon and steamed rice for myself and fish and chips for my better half.

By this time it was almost 4. With O and L up, we all set off to do what we had to do – explore streets and try local markets. We just went around the place looking at how the houses were built coz’ they seemed to stand on a 4 legged structure and almost every house had a courtyard. We realized that Kuantan is a very low activity area with some amazing vast spaces and a place where I could see animals grazing (gosh ! felt like eternity sicne I saw that), sparrows and kids playing with those tyres.

Check out this guy posing. We also spotted some cute chaps 🙂

We were snapping away sitting inside the car as though we were on a safari. Felt so good to see so much space and see the familiar fauna and hear the familiar sounds.

After some aimless driving, we decided to try the farmers market. This market is a small one that stretches along one of the streets for a short distance. It is famous for local delights. The entire street smells of satay. There were small round ring shaped sweets that I call adrasam and I was so astonished to see them there because I always thought adrasam was a sweet dish from the southern part ofIndia. Turns out that it is local toMalaysia as well and the only exception if the ring like shape as compared to the flat rounded shape that we eat inIndia. You get about 10 of the little rings for 1 RM. We really like the taste and so bought for 4 RM more. Yummy yum yum ! 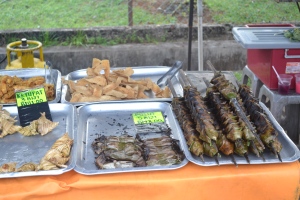 See! That is street food !

O and L tried satays of different types – mutton, beef etc etc while hubby and I tried the peanut butter crepe which was so so crispy and so so yummilicious !

I was so awed at how they make the dishes – you must just watch them churn out so many items in seconds ! Though the street was not crowded, there almost was always someone at every shop buying something or the other. I have come to realize that Malays love food. I felt a warm kinship with them for obvious reasons.

They also had green leafy veggies, durians, water melons, ice kacang, different types of tea (ice lemon, green ice lemon, chrysanthemum, jasmine green) as well. We just went easy on the drink because we have tried most of them here inSingapore and we had bigger plans for the night and needed some tummy space.

After about an hour, we left for the big mosque which is famous in Kuantan and is also one of the most beautiful mosques. It was on this day that we saw full moon in all its glory and we realized how much we had been missing in the tall-tall-buildings-everywhereSingapore. We just sat moon gazing because we were not allowed inside the mosque with our attires. We listened to the prayers and felt good. It was a lovely feeling – to be able to just sit there and watch people, their actions, the kids, their pranks, the attires and everything.

After about 45 minutes of blissful nothingness, we left to find a spa for us. We wanted to get a aromatherapy and we had forced our better halves as well. It was here that we had a real adventure. We just weren’t able to find any spa that had any free slots. We spent probably 1.5 hours that night just trying to locate a spa. We finally decided that we will book a slot for the next day. We found a Thai spa and booked for each of us a 2 hour aromatherapy each. And for 2 hrs it was just 120 RM – Imagine ! We were so so so so happy that we forgot we were hungry. 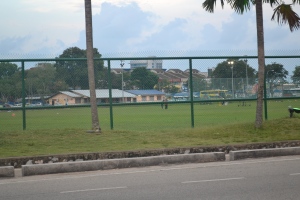 The hubby went berserk watching cricket being played by kids and teens in Mlaysia and had to take this snap to store the joy in picture form for him to cherish. I leave it to you to spot the players.

But not for long. Soon, we saw ourselves trying to find a place to eat, the kinds that your instinct forces you to go into. Soon, we found one ! – An all veggie place only to make me feel happy. I have such lovely travel partners, no? O and L love their meat but they opted for this so that I can have my (huge) share of delight !

The place had a poster saying “Go green and save Planet Earth” and that was the motto of the restaurant as well. It was a typical Chinese restaurant with the red Chinese lanterns and Buddha’s teaching playing on television there.

Not able to wait anymore, we opened the menu and lo ! The items were like – Roast duck, Abalone mushroom, frog kidney, chicken drumsticks etc. Now, I have long known that you can have vegetarian chicken – yes yes !  The ones made from soya that are made to look like chicken but apparently don’t taste like one. But am not a huge fan of them either.

So, we had to call the restaurant people there and ask them what was the menu all about. And the lady laughs at us and says, “It is all vegetarian. Only name is like that.” Phew !

We ordered like about 10 dishes, I think – toufu delights, fried rice, mushrooms, green leaves, deep fried veggies and veg. tom yam soup and fresh fruit/veggie juice. Wow ! That was some spread. As soon as we ordered, we doubted if we would be able to finish everything and then felt ashamed of underestimating our appetites.

I especially loved my carrot milkshake – it was slurpilicious !

When the food arrived, we couldn’t hold ourselves back for even a brief moment in between. We dug, scooped, chopped, massacred everything on the table. We even thought of ordering another toufu because it was as soft as butter and we hadn’t ever had anything like that before. Lovely lovely dinner !

What’s dinner without dessert? So, we had to find a place to go to for the dessert we were also craving for – Chendol. At this point, I must tell you a bit about this amazing dessert.

Chendol is a not VERY sweet dessert made of coconut milk, sweet flour shavings, red beans, glass jelly and sweet syrup in the bottom topped with a mountain (small) of crushed/shaved ice over which they pour sweet corn in another sweet syrup – it is absolutely heavenly, trust me.

We had even googled for the right place to eat Chendol but then we were too late and that shop (it was called Mustafa chendol) which was famous for its chendol was closed.

Since it was almost 11 and we were not going back with unfulfilled desires, we went to Papa John’s for chendol. While my better half and I ordered chendol topped with vanilla ice cream, O ordered some huge chocolate thingy with many scoops of ice-cream and L ordered aMilo treat along with some Lychee delight. Sitting outside the café, watching the full moon and feeling the zephyr was magical and made more so with the arrival of our desserts. We looooooooooooooooooved every spoonful. I love it when it remains tasty even towards the very end and doesn’t make us feel too heavy.

Since we did not click a picture of our beautiful chendol, I leave you with an almost similar picture from the web. Imagine this with more corn and also vanilla ice-cream on top. Sigh !

After a lovely day of blissful nothingness, we drove back to the resort where K & K fought over the remote and later cuddled off to sleep with me dreaming of Chendol bowls dancing.

p.s. I had more pictures but then we shared our cameras and so, don’t have all on my systm now. I wanted to still blog desperately before I forgot any detail

Coming up will be trips to beaches and nature walk and batik factory and also the spa ! 🙂